Even if Yahtzee Croshaw hadn’t released his novel Mogworld more than a decade ago, it would hardly count as a spoiler to reveal that this tale takes place mostly within the digital boundaries of the multiplayer video game of the book’s title. The cover art and text make it clear that the reader should prepare for a weird and fantastic adventure starring a zombie NPC named Jim, who finds himself unexpectedly resurrected after 60 years of deathly slumber by a renegade necromancer named Lord Dreadgrave. The only humans we meet are the unseen “adventurers,” aka players who pay their monthly subscription fee to Loincloth Entertainment, and the game studio’s programmers and executives, whom we see only through their chat windows and corporate emails. Those humans may design the world and assume they call the shots, but our interests are firmly rooted in the emotions and struggles faced by the game’s digital characters. In addition to novice mage Jim, our party consists of Meryl, his chipper “associate” who stitches broken NPC bodies back together, a dogmatic priest named Thaddeus who will always be more pious than you, and an endearing rogue named Slippery John, who speaks of himself in the third person and somehow cleverly manages to obtain his goals while tripping over his feet. Along the way they introduce us to other characters in their world, other NPCs with real fears, ambitions, and relationship quandaries.

Mogworld unfolds in Jim’s reluctant and sarcastic voice, and if readers have spent any time watching Zero Punctuation, Yahtzee’s popular game review video series for Escapist Magazine, it is a voice they’ll recognize. (In fact, if you’re a fan of his bullet-speed, caustic but usually accurate humor, take note that his narration of the audiobook version of Mogworld brings Jim’s deadpan observations to life with the same acerbic wit you’ve grown to love.) We’ll give him points for narrating at a more measured reading pace than in his reviews, since listening to him prattle on at breakneck speed is fun but exhausting. However, we’ll take at least a couple points off for the distracting and indefensible slurs about “fat people” he attributes to Jim in a couple places in the book that come out of nowhere and unnecessarily lessen the reader’s sympathies for this protagonist. (The bulk of Jim’s running commentary takes shots at people for their behavior or lack of planning and is genuinely funny and insightful.)

Notice we refer to Jim as the protagonist and not the hero of the book, and that is in respect to his own explicit preference. No character has ever refused the call of the hero’s journey more vociferously than this undead magic school student who would rather go back to his quiet crypt forever than traipse about in the land of Mogworld and get tangled up in all its weird drama. We see him constantly seeking his own deletion — throwing himself repeatedly off high towers, making deals with anyone who seems to have the power to erase his existence — let’s just say he lacks a  joie de vivre. In scenes reminiscent of Bill Murray’s best death experiments in Groundhog Day, we witness Jim’s string of failed exits as he continues to come back to life, his body significantly worse for wear each time. It takes him a while to start piecing together the truth of his world, and in the meantime we take part in his existential crisis. Long before Drew Hayes made us think about the inner worlds of NPCs, Croshaw’s Jim viscerally demonstrates the depths of their suffering.

His unsuccessful game of Russian roulette gives us a narrative example of the quantum suicide theory, a very complex idea that basically says that the minute Jim decides to throw himself from the tower (or end it all some other way), the universe splits into two – one in which he dies, and one in which he lives. The Many Worlds theory (or many digital backups, perhaps?) tells us that the Jim who lives in one universe cannot know about the Jim who dies in another. Extrapolate this idea out further and further, and one poor Jim is doomed to walk the land of Mogworld forevermore. In the interest of not spoiling the story and the paths these characters take, we won’t go further into how Yahtzee handles this conundrum on Jim’s behalf. However, we will note that Jim’s rough edges do start to smooth in his relationships with fellow NPCs and if he ever does figure out how to shut himself down for good, he may find that he’s changed his mind. Or not. Jim’s that bastard you can’t quite hate. 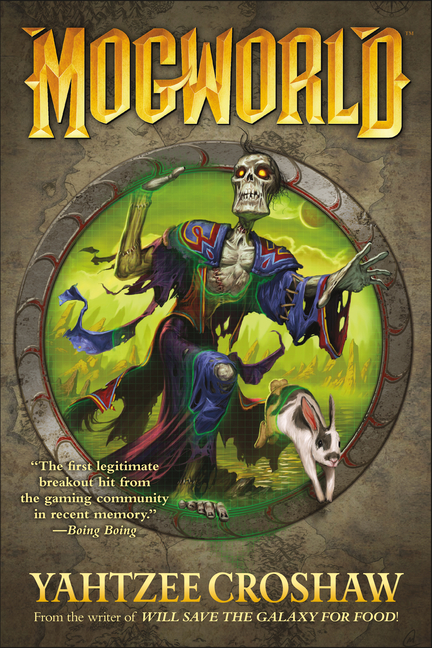 Take a peek inside

In addition to designing and playing a ton of video games, Yahtzee cites as his influences the writing of Douglas Adams, Terry Pratchett, and Neil Gaiman, and while none of those writers come close to producing the caustic tone we’ve come to look for in Croshaw’s work, they do come to mind when he’s at his wittiest. As his videos attest, he’s a master of the provocative and imaginative metaphor.

Perhaps what remains when Jim is stripped of his barbs and cynicism is a vulnerable, self-aware creature, longing for an explanation and autonomy over his own existence. That’s a heavy, universal quest that any reader can grok, even if it’s couched in a comic romp chiefly designed, as Yahtzee mentions in his dedication, as a way to make up for the months of his own life he lost as a player in World of Warcraft. And so, despite this flippant approach, he has given the world an early GameLit narrative that transcends its own throwaway sarcasm in service to character development. Jim and his friends may be “game-breaking bugs” to their creators, but they are the bits that keep this story moving for readers. (And if we’re smart about it, we’ll keep that knowledge to ourselves and not even let them know we exist. If we do truly exist, that is.)

Skip back to main navigation

Northwest Quest Publishers values stories that give voice to writers and characters who might be absent from or under-represented on bookstore shelves. Our focus inhabits the realms of regional history and folklore past and future, and embraces a contextual sense of place. We care about building community through collaborative storytelling and fostering an appreciation for culture, fun, gaming, and good writing in a blend of formats.